History of the Library - The City of Glendora 1912

Libraries are the real treasures of most towns; full of riches and people who will help you find them – author unknown 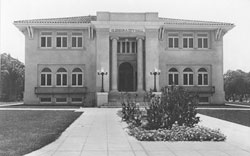 As of May 1, 1912 the City assumed the financial support of the Library, formally adopting the Library as a department of the city government on May 20, 1912.

The Woman’s Club turned over to the new city public library over a thousand books that had been collected after a great deal of effort on the part of both the Athena Club and Woman’s Club. 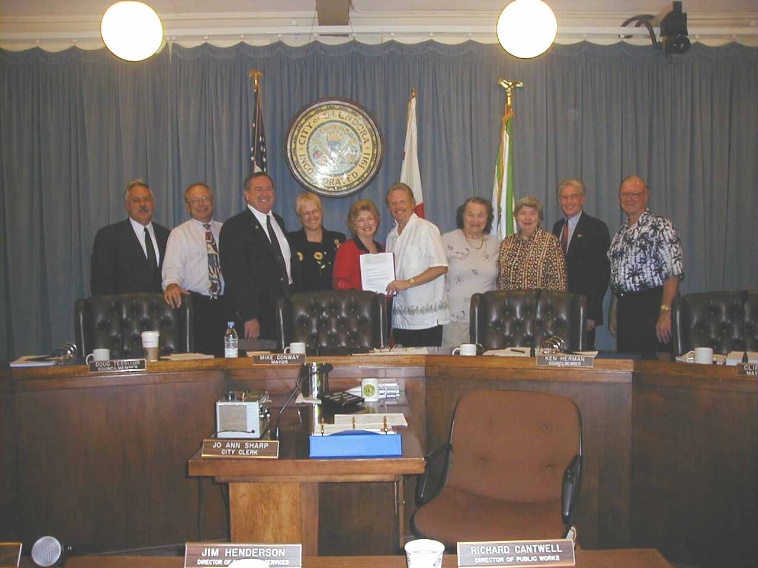 The Woman’s Club continued to support the Library, raise money and repair books even after the City took over the Library. The Club’s support continues to this day. The Woman’s Club has been recognized by legislators at all levels, city, state and federal, for their founding of the Glendora Public Library and support.

The first months’ business consisted of 368 books loaned, 42 magazines loaned, $2.12 in fines collected with a total of 107 readers.

The Library was still located in the Opera House, and it was decided in July 1912 that the Library would lease a store room in the Lewis block, located two doors north of the Glendora Bank (located between Meda and Bennett on the west side of Michigan Avenue). It was believed that this location would increase the library’s patronage, the quarters were more spacious, and they were on ground floor and much easier to access. The move was made in September 1912.

In January of 1914 the Library received their first credit for tax money (a sum of $783.86). The Library moved to larger quarters, which was a room rented from John Lewis (where the Gleaner newspaper was located). The Library also rented a room known as the “pool hall.”

The Library continued to grow and in September 1915 moved to a new brick building - referred to as the Adams building.

In November and December of 1918 the Library closed its doors due to a flu epidemic. All public gatherings were prohibited and the schools and churches were closed. During this epidemic, library books from flu infected homes were returned wrapped and sealed in heavy paper, not to be touched for a year.

The Library opened its door again in January 1919, but only to students who needed books for their school work. It opened to the general public in February 1919.

In April 1922 the Library was able to move from the Opera House Building into the east portion of City Hall.

The first Children’s book week was held in November 1929.

By 1930 the Library had become so crowded that an annex was added to City Hall to provide a much needed children’s room. The annex was made possible through the direct instigation of the Library Board, Mrs. Reed, Mrs. Fleet, Mrs. Williams and Mrs. Shelton, who approached the City Council. The Council authorized the Board to hire an architect and present plans with the price not to exceed $3000. This was done and the annex was paid for with money in the general fund. The total book collection at this time was 10256. The first annual report following completion of the annex showed a circulation of 23,537 books.

In August of 1930 Mrs. McLeod (a teacher at Citrus Union High School) offered story time from 10 to 10:45 each day and mothers were urged to leave their children at the Library for a story or two while they did their shopping.

As the third decade of the 20th century drew to a close, the population of the city had grown to 2761 and the Library now possessed over 10,000 books.

In 1946 Rolfe B. Bidwell, local attorney, and his daughter Lillian presented a beautiful camellia book to the Library dedicated to the memory of their wife and mother, Robina A. Bidwell. This was the beginning of the memorial collection, which has continued to grow through the years. Mr. Bidwell also donated several pieces of solid oak shelving on which to shelve the memorial books.

By 1955 the Library quarters were cramped again-this time by the City Hall departments as well as the Library. Mr. Rolfe Bidwell came to the rescue by donating $35,000 for the addition of another wing to City Hall for the expansion of the Library facilities. 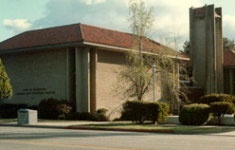 By 1971 the Bidwell Memorial Library had outgrown its quarters and a new building was erected on Glendora Avenue between City Hall and the Police facility. The doors were opened to the public on February 28, 1972.

In 1992, the Glendora Reads! adult literacy program was started. That year also saw the opening of the Friends of Glendora Library Book and Gift Shop.

In 1993 the Glendora Public Library Friends Foundation was formed as a 501{c}3 non-profit corporation. The foundation partners with the City of Glendora to provide volunteer and financial support to enhance library services. The foundation provides this support through gifts, grants and donations.

In April 1994, the library opened the Computer Learning Center, giving the public access to computers and eventually the Internet. The library hosted the first City of Glendora’s website and employee e-mail network. All of this was made possible by the Friends Foundation. 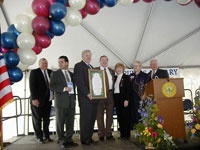 information, imagination and inspiration to the Glendora community! The Glendora High School’s Tartan Pipe and Drum Corp. and the Boy and Girl Scouts as color guards kicked-off the event. Dignitaries from the community and the political arena gave speeches and proclamations in honor of the library and its volunteer roots. After the formal ceremony was completed, music, food, a historical portrayal of Pio Pico, games, prizes and a puppet show kept adults and children entertained. 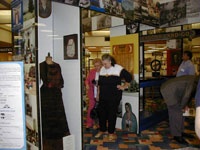 A special historical exhibit was commissioned by the Friends Foundation and placed on the main floor of the library. Photographs of Glendora from its early days to the present adorned a large structure. Smaller historical displays were rotated throughout the year within the larger structure including the citrus industry, inventions, Route 66, local churches and antique clothing, toys, radios and trains.

Special programs for the community filled out the year: music, poetry readings, author visits, a garden expo and a quilt exhibition to name a few. A special visit from 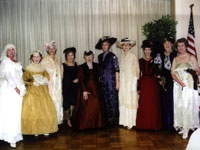 a delegation from Merida, Mexico was a unique highlight and included a day of Yucatan art and culture. The Glendora Women’s Club held a special antique fashion show in honor of the celebration. Many community businesses and groups helped make this year long celebration possible through donations of food, time and money, with the Friends Foundation in the lead! 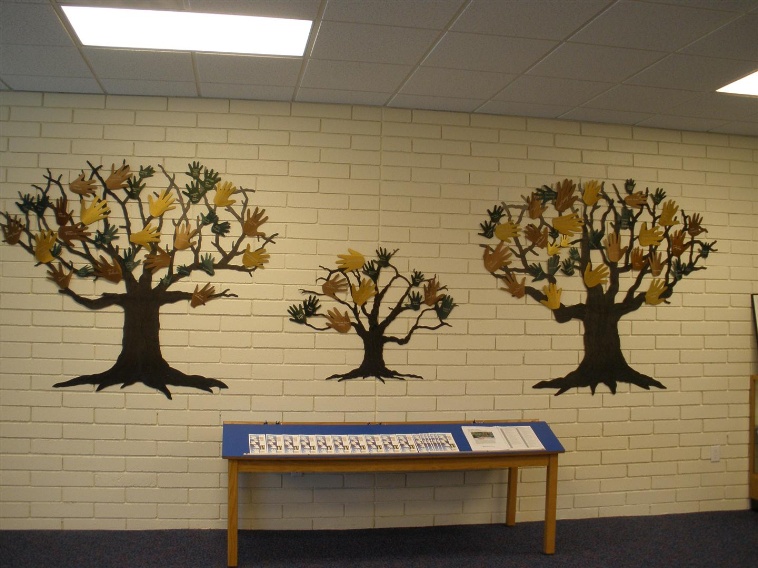 In April 2009, the Library held its dedication ceremony for the newly completed Friends Room and the City’s first extreme water-wise garden. Community support for the Friends Room was captured by their hand prints placed on a metal oak tree as the leaves. The art work was created by Conrad Brazzel. The water-wise garden was created through a partnership with Monrovia Growers, who donated the plants and expertise; and the City’s Planning, Public Works and Community Services departments.

May 11, 2012, marked the Centennial celebration of the Glendora Woman’s Club handing over their library to the Glendora City Council. This generous act created the Glendora Public Library. 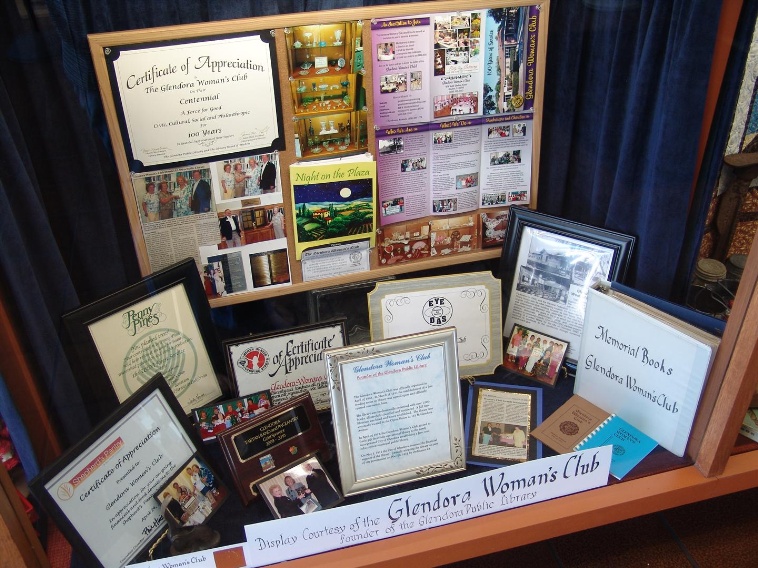 The month-long celebration included the creation of a list of Glendorans top 100 books. Both adult and youth titles were submitted by the community. The Woman’s Club had a display up in the lobby highlighting their achievements. 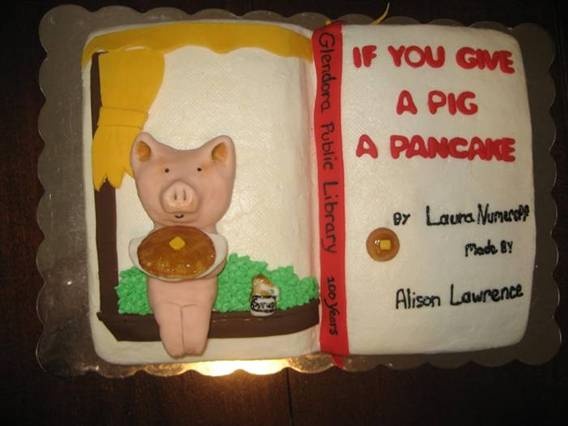 A “Book Eating Contest” was the highlight of the celebration. Community members created cakes based on the titles of their favorite books. The People’s Choice Award went to “If You Give a Pig a Pancake”, created by Allison Lawrence. Ice cream, personalized bookmarks and proclamations from local legislators marked the day.

A DVD was created on the history of the Glendora Woman’s Club and the Library as part of this important milestone. It was shown on the City’s cable station and as an episode of the video magazine, “Go Glendora!” A copy of the DVD is available in the Library.

The Glendora Public Library and Cultural Center has approximately 5,000 visitors a week. It contains over 140,000 volumes, including books, e-books audio books, both on CD and via download, music, movies, magazines, computer databases, access to the Internet and digital resources that can be used from home, office, school and at the library.

The library continues to strive, grow and change to respond to the needs of our citizens. The Glendora Public Library and Cultural Center has been called “The Crown Jewel of Glendora”, a moniker we don’t take lightly!

Libraries are the pillar of any society – John Jakes, Author