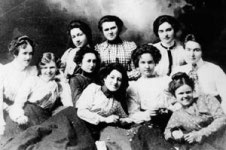 In October of 1903 a group of 19 young women met to organize a club. The name Athena Club was chosen. They decided that every three months, each member should pay the sum of 25 cents into the treasury.

One member, a Mrs. Clyde Nichols, suggested starting a free reading room on a small scale, and as the club grew, to secure the necessary means to enlarge it. The club voted to undertake the project and money, books and magazines.

The formation of a library was one of the main objectives of the group and to finance the purchase of books, many social events, such as oyster suppers and strawberry festivals were conducted.

On January 26, 1904 the Glendora Reading Room was opened, offering some books and magazines to eager readers. Volunteers staffed the reading room. The exact location of this first reading room is difficult to pinpoint. One location given is a storeroom on the northwest corner of Michigan (now Glendora Ave.) and Meda; another is in the back rooms of what later became Reed’s Hardware at Michigan and Meda (southwest corner). Another location reported is between Meda and Bennett on Michigan and still another mentions that a Mr. Weaver gave the club a building for the reading room.

When the reading room opened, a Mrs. McCormick was overseer in the daytime and a Mrs. Shepherd in the evenings. A list of standard and popular magazines had been ordered and a number of older magazine issues were on the shelves.

As activity increased it was realized that the reading room was not adequate and the Athenas rented Frank Odell’s house (Odell was a father of charter member Verna Odell), south of the Weaver building and just north of the wash (approximately where the Village book store now stands). The Library was in one room and the librarian had the rest of the house rent free and received $12 a month.

Every month about 12 of the first class magazines were received, along with several weekly papers and two daily papers. The Women’s Christian Temperance Union also generously donated to enable the Athena Club to purchase books. The patrons grew as did the library.

Through the Glendora Gleaner (the local newspaper) the ladies of the Athena Club notified those who had kept books over two weeks that they would be taxed two cents a day until their return.

On March 11, 1905 a public meeting was held at Forrester’s Hall to discuss the plans for a public hall, library and library rooms. Everyone was encouraged by the attendance and the interest show by the citizens of the town. It was decided that the matter of incorporating the club would be brought up at their next business meeting. In this way they hoped to sell shares in the building and get the support of all of the citizens of Glendora. No further mention of this endeavor can be found.

In January 1906 the Athena Club decided to move the Library into the Fager building and Mrs. Kingsley was engaged to act as Librarian. It was decided to hold a dime social that month to raise money to pay the expenses of moving, renewing magazine subscriptions and the rent.

On February 7, 1907 the Gleaner noted that the Athena Club held its regular meeting. Owing to the inclement weather only a small number of members were present and no business of importance was transacted. There was no further mention in the newspaper of the Athena Club or the little Glendora Library until March 1909.

The Athena Club faded after February 1907 and apparently the reading room book collection was abandoned for several years until the time the Athena Club became part of the then newly-formed Glendora Woman’s Club.