The Incorporation of a Town into a City

An excerpt from “Pride of the Foothills: An Illustrated History of Glendora” due to be published in 2011 by Ryan Lee Price 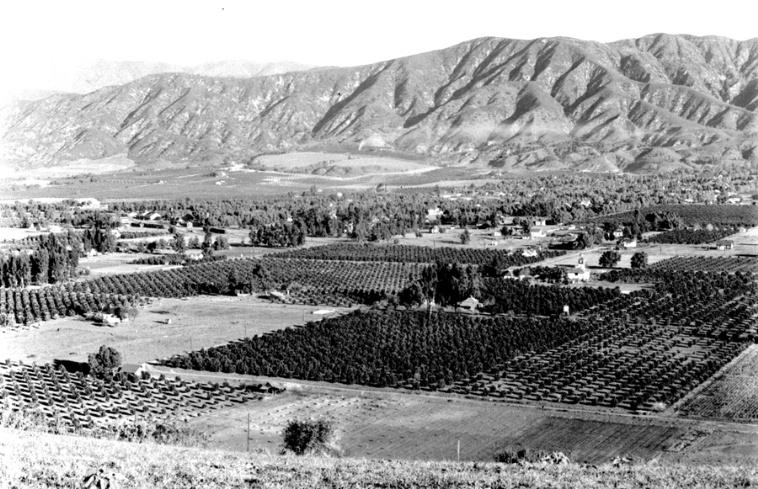 Taken sometime after 1905 from atop the South Hills, this image shows the hotly contested area of incorporation, from the town center of Glendora in the foreground to Judge Silent’s 100-acre property just above the center. The rest of the town is either dotted with young citrus trees recently planted or mature California Pepper trees and hundred-year-old California Live Oaks.

Years before it would be known as the “Pride of the Foothills,” Glendora Gleaner editor John Atlas Jones described Glendora as “The Crescent City” in the April 1912 issue of Out West magazine. He wrote about Glendora’s recent incorporation: “With the organization of a city government, Glendora may fairly be said to have entered upon a period of growth and prosperity seldom witnessed, and it is fair to presume that in the next three years the population will not be less than 5,000 and the wealth increased many fold.”

The City of Glendora was incorporated merely six months earlier, officially recorded with the County of Los Angeles on November 13, 1911, as the 25th city to achieve incorporation in the county (the number currently stands at 88). It wasn’t an easy road for those wishing to matriculate Glendora’s rural government to complete independence, as conflict and divergence quickly divided the town.

The first buzzing of incorporation in 1911 began on Tuesday April 25 during a routine Board of Trade meeting, during which it was discussed that population and wealth of the residents was at a level that justified obtaining the conveniences under an incorporation. Those board members present, under T.H. Miner as president, unanimously voted to call a general meeting for Saturday May 13 for an open discussion concerning the town of Glendora becoming the City of Glendora.

In the August 10, 1911, edition of the Glendora Gleaner, editor Jones published the official boundary lines in a “Notice and Petition for the Incorporation of the Town of Glendora into a City of the Sixth Class.” Signed at the bottom of the petition were 184 names, representing many of Glendora’s prominent citizens.

On October 2, 1911, after meetings on the two previous Mondays were held where vigorous points were made by individual persons about why they should or not be included within city limits, the Los Angeles County Board of Supervisors granted the petition for Glendora to vote for incorporation. As well, they settled the boundary dispute for once and for all by revising the proposed city’s borders, as reported in the September 6th edition of the Gleaner: “Sierra Madre avenue on the north; Grand avenue on the west; Mauna Loa on the southeast to a point where it reaches the San Jose hills; thence with a deflection for a short distance to the intersection of Loraine avenue; thence on Loraine avenue to Sierra Madre avenue, or the point of beginning.”

The approved petition encompassed 1,440 acres of city limits, to the delight of some and the disappointment of others.

The following edition of the Gleaner ran an official description of the city limits as well as the official call to vote, a notice of election which was scheduled to be held on October 31st urging residents to vote “For Incorporation” or “Against Incorporation” as well as to fill the six Board of Trustees positions, a Clerk and a Treasurer required by law for a city with a sixth class incorporation status. The official polling place would be set up at the Glendora Bank Banquet Hall, aka the Opera House.

“Grand Victory For Progress” rang the headline of the Glendora Gleaner on November 3, 1911. What was called the “most hotly contested campaigns known in the history of Glendora,” and a “sweeping victory” was really quite a close call. The vote for incorporation slimly won by only 42 votes, 152 for and 109 against. Interestingly enough, 312 votes were cast but only 261 were counted due to voter mistakes; a full 16 percent of the total ballots collected were thrown out, enough to swing the vote in the other direction.

In the same issue, J.A. Jones editorialized about the events of 1911: “We…bid adieu to the pretty…village we have loved so long and well—the apple of our eye for [the] past 16 years—confidently believing that when we returned to our offices and labors, it would be our good fortune to publish to the whole world that Glendora had dropped her swaddling clothes, let down her silken skirts and was now ready to assume her rightful place among the cities of this fairy land.”

“We rise to salute thee, City of Glendora, and facilitate with the proud dwellers within your fair domain.” 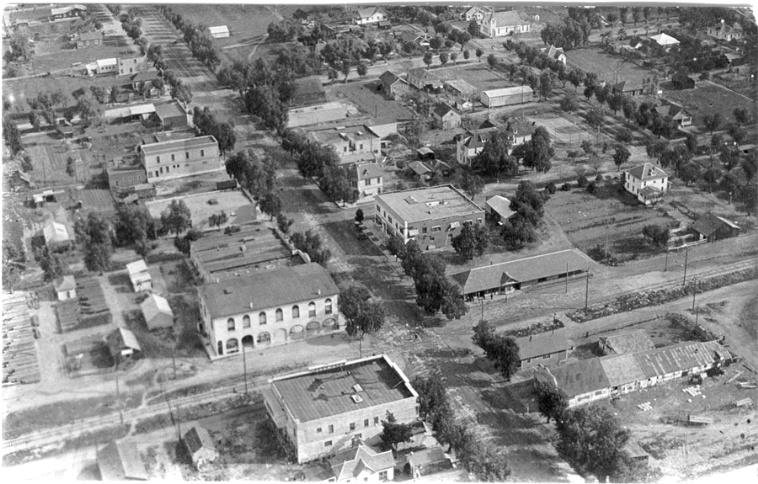 Taken from a balloon, this image is from 1912, showing an excellent view of downtown Glendora as it appeared shortly after incorporation. Note the freshly paved sidewalk in front of the Banholt Building.

Chicago Cubs first baseman Frank Chance is famous not only for being part of the Tinker-to-Evers-to-Chance double play but also for being the first player ever to be ejected from a World Series game (in 1910). Two years later, just after Glendora became a city, he found himself in Glendora overseeing the construction of the Chance Building across the street from James Dyer’s grocery store.

Looking southeast from the corner of Meda and Michigan avenues around 1915, shows a relatively sparse main street. The open-door panel truck in the center is delivering laundry from the Glendora Cleaners. Matthews took over Wamsley’s share and moved the store to Foothill Boulevard, so C.A. Weaver’s financial institution took its place.